From Frome, With Love. 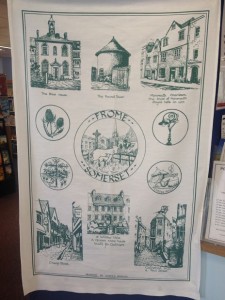 What do you usually bring back for friends & family when you return from holiday? In Frome, we find that relatives often buy their families tea towels. Yes, the Frome tea towel sold by the Tourist Information Centre is so popular that family members and visitors from all around the globe have them. Some tea towels can be found as far away as Singapore!

Over the past week alone, four of these famous tea towels were sold to tourists from Canada, Italy, San Francisco and even Japan.

But the question still remains – why are they so popular? 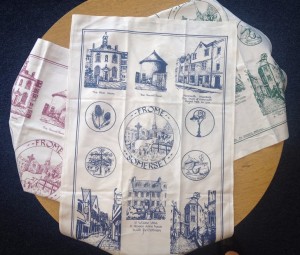 Designed by Doreen Barlow and printed by Lorna Wiles, these globetrotting tea towels are decorated with scenes of Cheap Street, Rook Lane Chapel and other Frome favourites. Even the Frome-made Cockey lamps are included in the design, 70 of which can still be found in the town today.

The tea towels have been sold from the Tourist Information Centre in the Frome Library for at least five years and now come in teal as well as green, red and blue.

If the towels aren’t quite your cup of tea, there are plenty of other wonderful souvenirs that are revered by tourists and locals alike, such as a wide range of mugs, bags, leather bookmarks and much more.

So on your next visit to Frome, make sure to stop by the Tourist Information Centre to collect a town map and grab your official souvenirs. And if you do bag yourself a towel, we’d love to hear where it’s ended up!

Further details can be found on the Frome Town Council website.