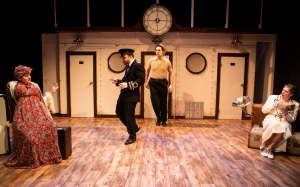 Following a sell-out world premiere run at the Ustinov Studio in 2019 and a critically acclaimed national tour, multi-award-winning theatre company New Old Friends are set to return this Autumn with a UK tour of their hilariously inventive comedy thrillers, Crimes in Egypt.

Crimes in Egypt toured in 2019 as Crimes on the Nile, playing to over 17,000 people across 23 venues, including multiple sell out performances. It is heading to Frome’s very own Merlin Theatre on Friday 3rd September and Saturday 4th at 2.30pm and 7.30pm.

Heather Westwell, co-artistic director said, “Touring is such a huge part of who we are as a company and we love taking shows to different theatres up and down the country. So we’re over the moon to finally be touring again with this brilliantly bonkers show.”

New Old Friends are an award-winning theatre company dedicated to creating original comedy theatre, founded in 2008 and run by husband and wife team Feargus Woods Dunlop and Heather Westwell. Last year saw New Old Friends release the first in a new audio drama series Comedy Whodunnits For Your Ears, with Crimes Against Christmas (OnComm Award winner) charting at #2 in the Apple iTunes Fiction chart and inside the top 200 overall podcast charts as well as featuring on BBC Radio 4’s Front Row. Recent instalments also include Crimes on Centre Court and Crimes of a Country Garden, both released earlier this year.

In 2017 and 2018 New Old Friends were awarded the Creative Bath Award for writing.  Previous shows also include five instalments of the hugely popular Crimes… series of comedy thrillers, including 2019’s spring hit Crimes on the Nile. In summer 2019, their adaptation of Anthony Horowitz’ The Falcon’s Malteser enjoyed a six-week run at London’s Vaults Theatre. It was selected as a ‘Critic’s Choice’ for ‘Best Family Shows’ by the Guardian.

Tickets for this exciting show are £16 and can be booked at Merlin Theatre.