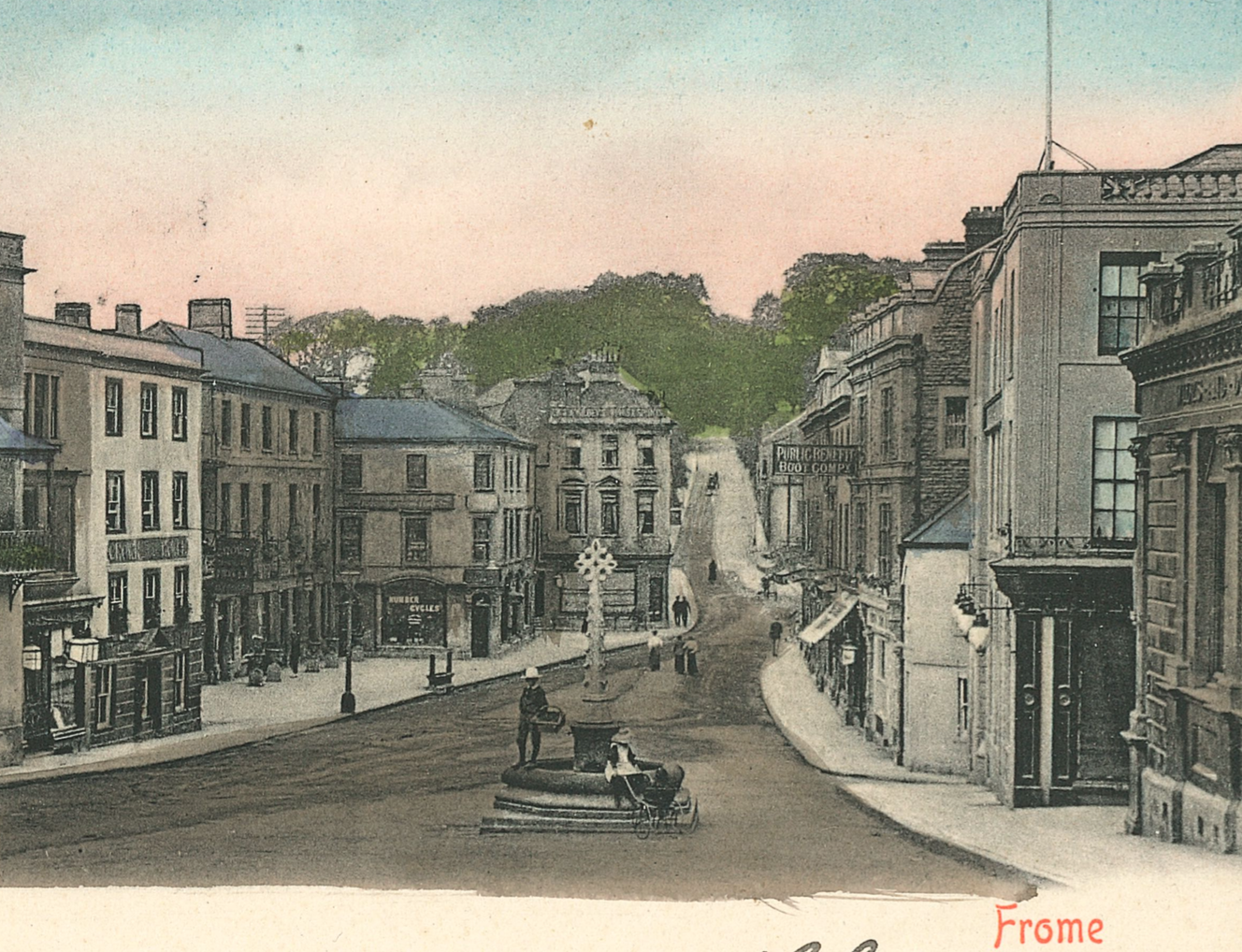 The Frome Almanac of 1869 notes events of local interest that have taken place during the preceding year. It appears that our town in the 1860’s had a varied programme – not so different from today.  The highlights were; the inauguration of the Frome Scientific and Literary Institute (now Frome Museum), a Sunday School Festival heralded with a procession of nearly 2,000 people to Wallbridge House, the Frome School of Art gaining a South Kensington National Scholarship for one of its students, a large reservoir of water being erected beneath the pavement in Paul Street (to be used in case of fire), the building of Redland Terrace , “handsome” villas at West End, and the first mention of the Boyle Cross: 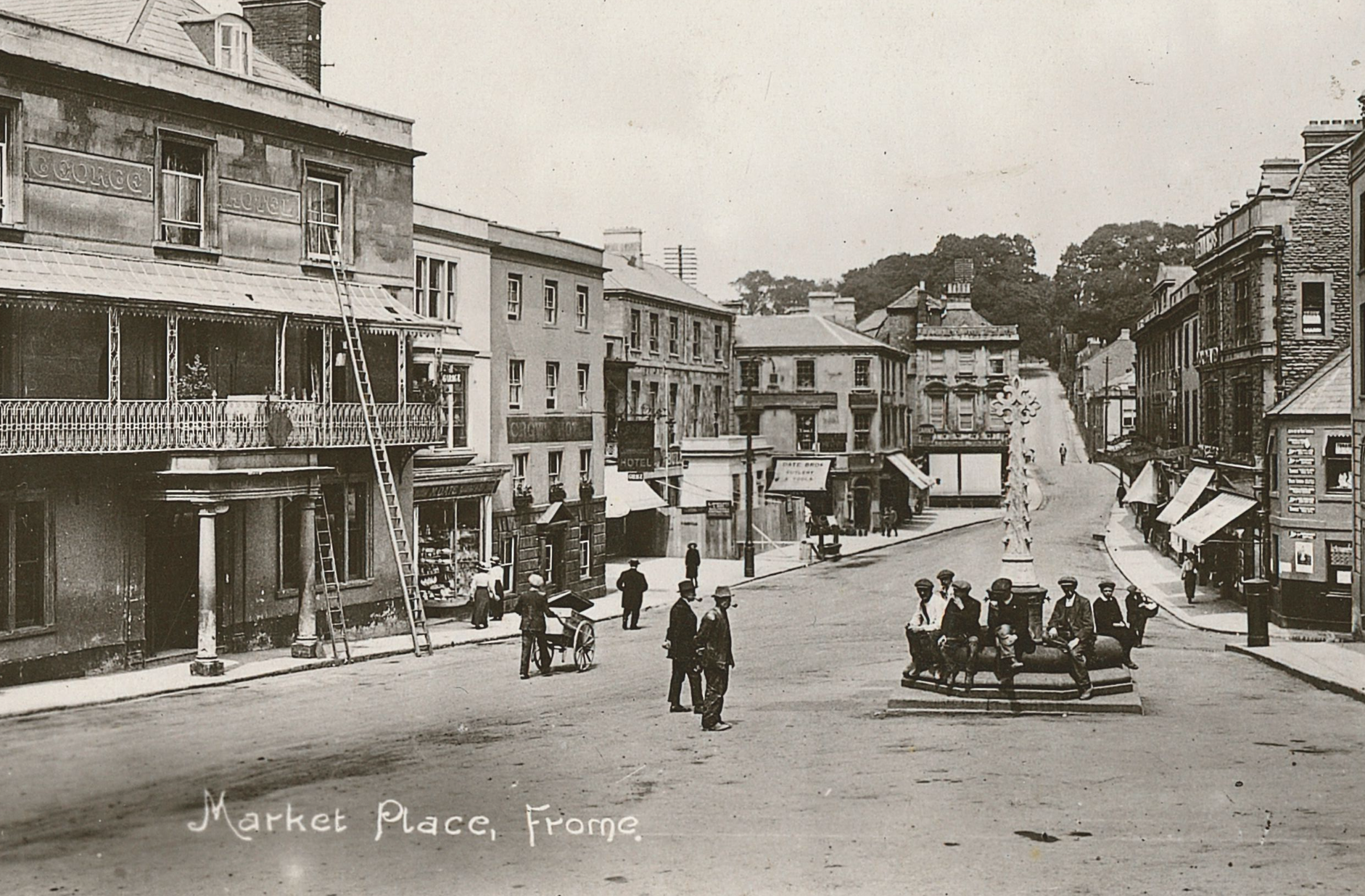 “The Local Board are also engaged in carrying out plans for conveying water to the Market Place to supply a drinking fountain, which the Hon. and Rev. R. C. Boyle has generously proposed to give to the town; the Earl of Cork having given the site.”

The Boyle Cross  was erected in 1871, and was the idea of Eleanor Vere Crombie Boyle, artist and author – affectionately known as “E.V.B” to the Victorians and she was the wife of the aforementioned Rev. R. C. Boyle. We can chart some of her involvement in the artistic life of Frome as recorded in the Frome Almanac. In November 1870 a paper she had written on ‘Art Education’ was read at the Frome School of Art presentation of prizes and subsequently printed and handed to each pupil. And on July 4th, 1871 the “Hon. Mrs Boyle” was offering four prizes worth £5 each for pupils, two of which were for the best drawing in chalk of two busts she had presented to the Art School. 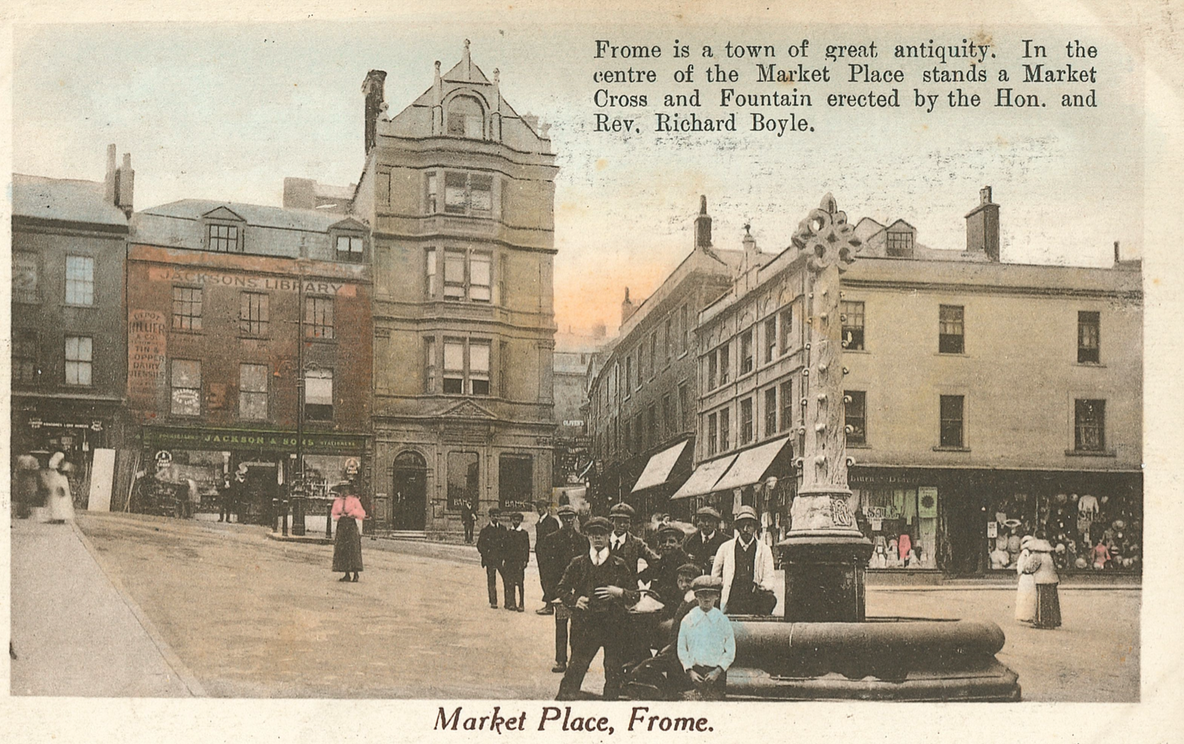 But the Boyle Cross was a leaving gift for the town for which she and her husband obviously felt great affection. The Rev. Richard Cavendish Boyle, the youngest son of the 8th Earl of Cork and Orrery of Marston House, had been the vicar at Marston Bigot for 42 years. It was “E.V.B’s” idea to present Frome with what she felt it lacked, a market cross and a drinking fountain. Joseph Chapman was chosen to carve it – which took six months – and the finished cross weighed one ton.

The Frome Almanac of 1871 gives us a complete description of the opening of the ceremony on the 11th June: 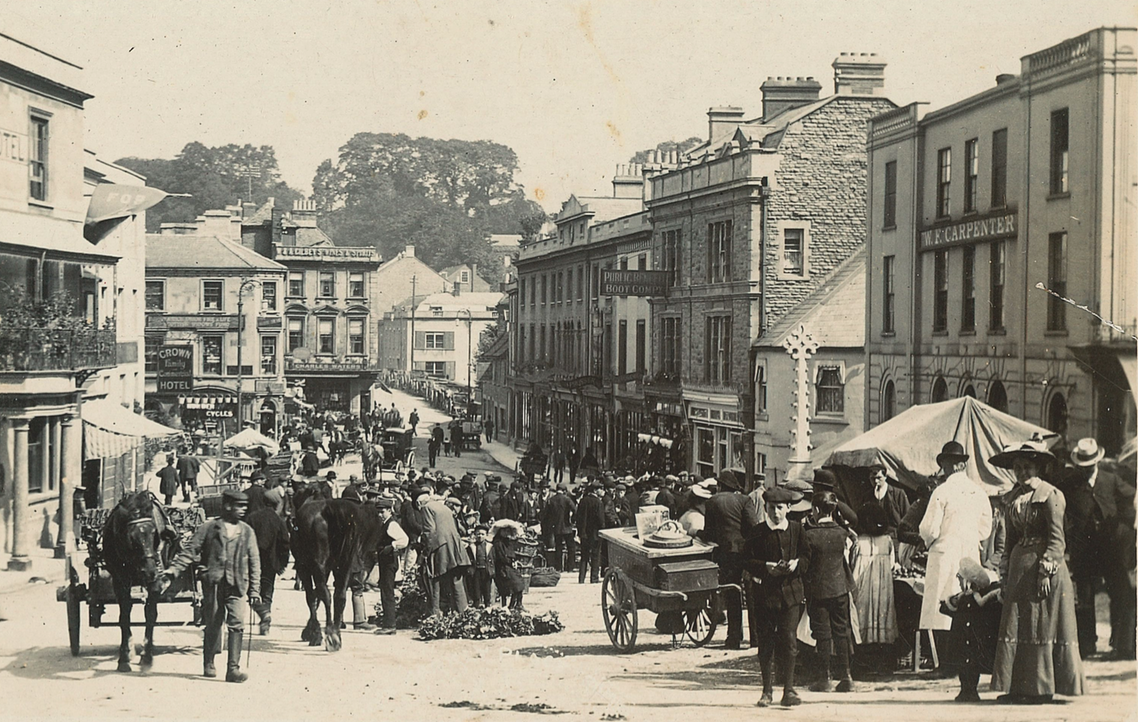 “Opening of the fountain, the gift of the Hon. and Rev. R.C.T. Boyle, in the Market place. The fountain was designed by the Hon. Mrs Boyle, and the sculptor was Mr Joseph Chapman. The site was given by the Right Hon. the Earl of Cork. The platform, bowl, pedestal, and shaft base bear appropriate inscriptions. The opening ceremonial was imposing: the Market place was gay with flags and banners; there was music by the Rifle Corps Band; a procession of Local board members and other gentlemen; and speeches by P. Le Gros, Esq., John Sheppard, Esq., the Rev. A. Daniel, the Hon. and Rev. R. C. Boyle (the donor), the Rev. T. G. Rooke, Messrs. Flatman, R. Porteous, and Chapman.” 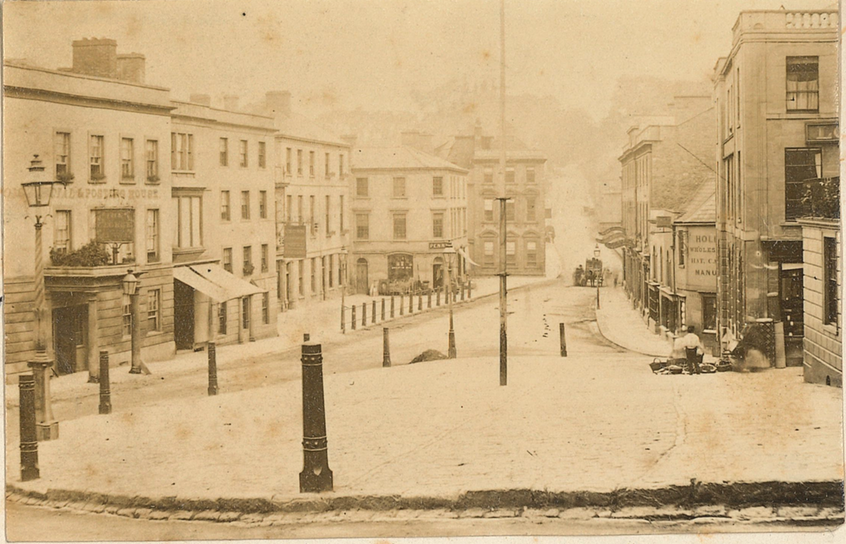 In 1871 the Market Place, complete with the newly unveiled Boyle Cross, was still the centre of the livestock market. On market day cattle and sheep could be found tethered and penned, sometimes all the way up Bath Street. It was even more chaotic on ‘Frome Fair’ days as along with the bawling livestock , the market place and surrounds were filled with noise of small firing booths with rifles, vendors of fly sheets singing samples of their songs, the cries of ‘quack’ medicine men, a dancing bear to music accompaniment, and Punch and Judy shows. 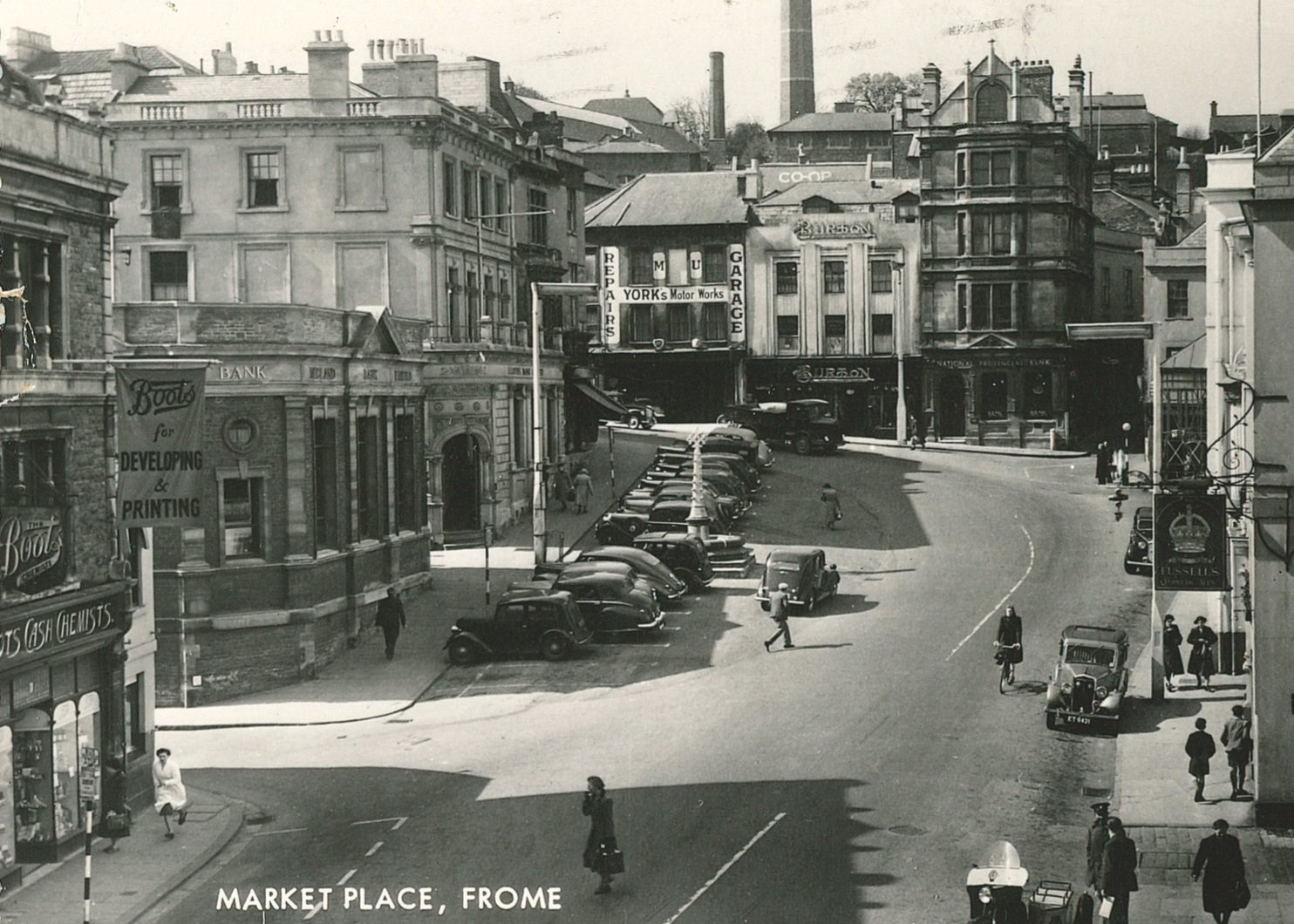 The altogether quieter nature of the Market Place we now know didn’t come about until 1875. It took the formation of the Frome Market Company, the purchasing of the market rights and tolls from Lord Cork, and a special Act of Parliament – the Frome Market Bill – to gain Royal Assent in June 1874, before the livestock market was moved to Justice Lane in 1875.

147 years on from the original opening of the Boyle Cross fountain we have come full circle with the refurbishment of this beautiful cross of red Devon marble, which again contains a fountain, although this time of an ornamental nature. 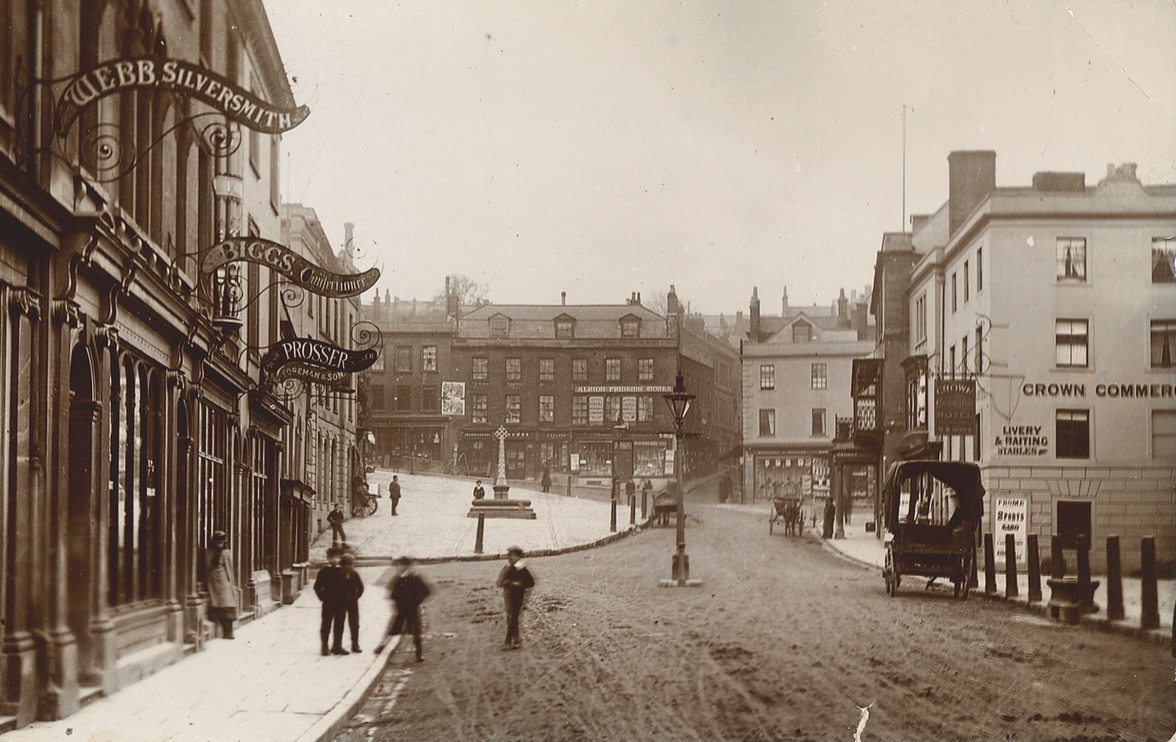 The Market Place in which it stands has not changed intrinsically in all those years, the buildings are still recognisable. Frome again boasts a monthly market, bringing people from far and wide, and filling the market place with something of the hustle and bustle reminiscent of the markets and fairs of old, all of which would be recognizable to Eleanor and Richard Boyle for whom its named. 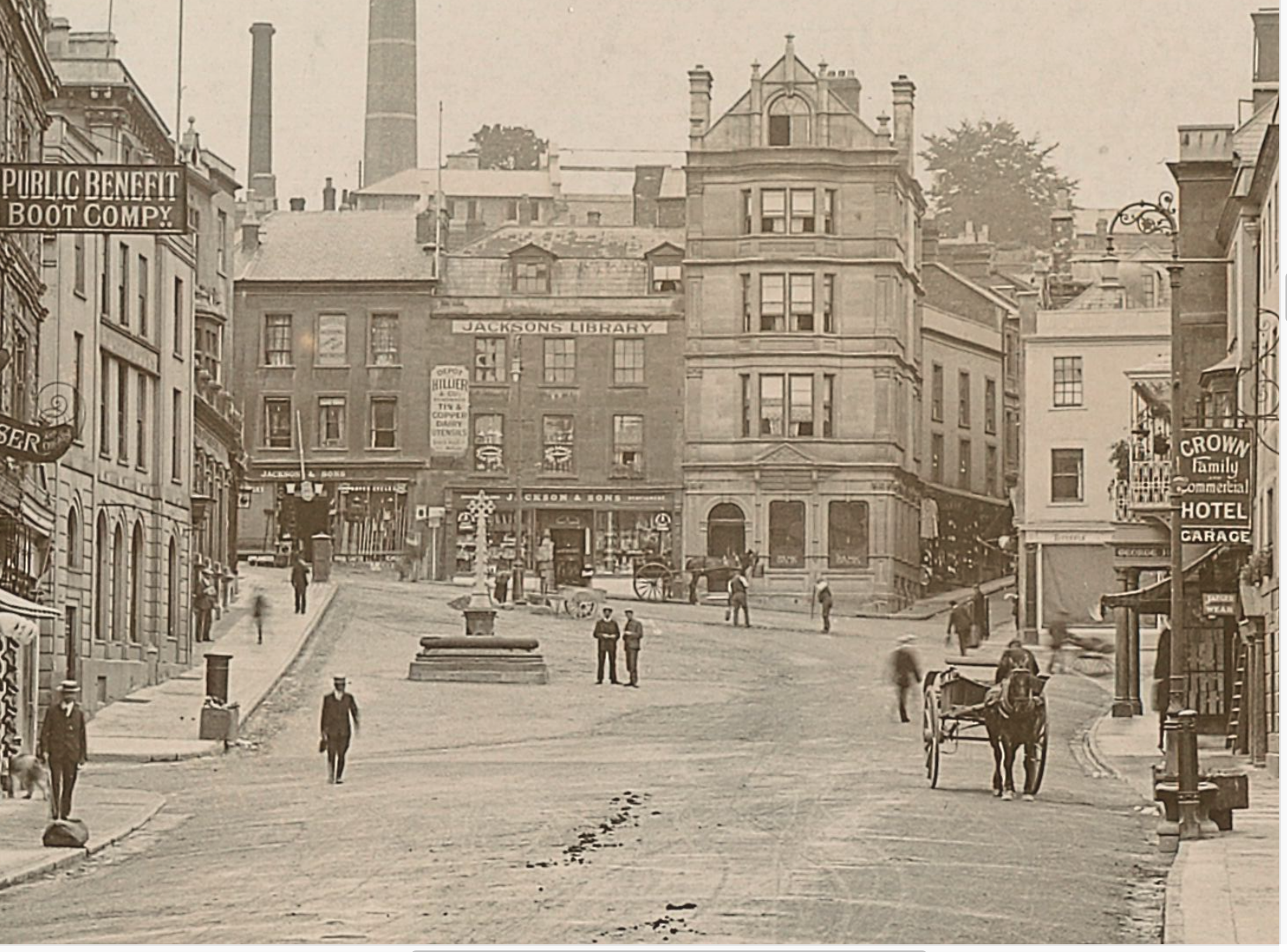