As early as September 14th 1914 the Somerset Standard reports the arrival of the first Belgian refugees in Frome, a little over a month after the outbreak of the First World War. All fifty refugees that Frome had made provision for had arrived by the 25th September; mostly farming families from the area between Aerschot and Louvain. 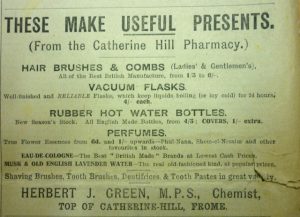 They had lost everything, their houses and belongings either demolished or burnt. They had distressing tales to tell and almost all of them spoke only Flemish, so interpreters were needed. In the confusion and disruption one of the older ladies thought she had come to ‘Rome.’ But Frome rallied to the cause. Homes and jobs were found, and a club was set up for them at the Temperance Hall on North Parade. Nicknamed ‘The Temple’, this became a lifeline. Here they met on a regular basis not only to socialise but also to do work for which they could help their own “kith and kin” as the Somerset Standard reported it; making warm garments to be sent to Belgian soldiers. 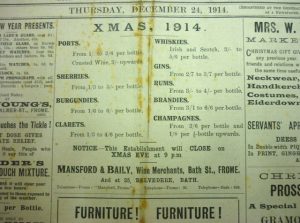 Christmas 1914 must have been a particularly tough one for everyone. Frome families missing loved ones away fighting and the refugees who found themselves far from home and the surroundings and traditions they knew so well. But it appears that the people of Frome were determined to give them as good a Christmas as possible. So, the Somerset Standard reports a Christmas party that was held for their benefit on the 29th December:

It was truly happy scene that presented itself at the Church of England Boys school on Tuesday evening. The reader must picture a room charmingly decorated with art draperies and evergreens-a Christmas tree resplendent in sliver tinsel, with branches drooping under weight of many presents, and nearly 60 people (grown-ups and children), whose faces were radiant with a spontaneous delight.

The faces were those of the refugees from stricken Belgium to whom it is the privilege of Frome to give hospitality until their once beautiful country has been restored to them. It was a happy inspiration of a few ladies to give the Belgian refugees a real English Christmas Entertainment.

At the end of the evening:

…..blind man’s bluff was played and the fun became faster and furious. Mrs. Lewis seated herself at the piano-which was the signal for musical chairs, and one chair squelched with melody as it collapsed beneath a weight beyond the maker’s guarantee. “Sticking the pig” was a popular diversion, and Mr. Claude Stert lured many to try to do the impossible-to light 30 candles with a single match. And so, the evening sped on, and the refugees hurried themselves to their temporary homes, happy in the knowledge of one more instances of the kindness of their English friends and allies.

And so nearly a hundred years on, Frome’s warm welcome continues, welcoming families from war torn countries, only further afield this time.