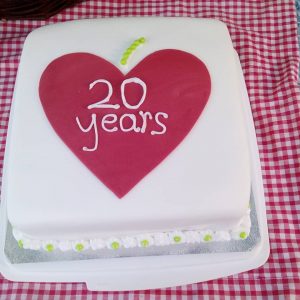 This Saturday Frome Farmers’ Market will be celebrating the 20th anniversary of Somerset Farmers’ Markets with live music, a free prize draw and birthday cake.  Not to mention the exciting local produce that regular shoppers have come to expect.

Held on the second Saturday of the month at the Cheese & Grain, and first Sunday of the month as part of the Frome Independent, Frome Farmers’ Market is one of the largest stand-alone markets in the South West.  With up to 38 award-winning local food producers, the market has won many awards including a Gold in the “Taste of the West Hospitality & Retail Awards”.

Somerset Farmers’ Market was launched in 1999 as a direct result of the first climate change summit in Rio. United Nation member states developed an action plan to ‘act locally’ to prevent climate change by promoting local initiatives focused on sustainable development, including the promotion of local food production.

The first Somerset Farmers’ Market was held in Glastonbury, closely followed by Frome and soon a network of regular markets built up around the area. There are currently seven regular market locations, including Axbridge, Midsomer Norton, Keynsham and Burnham-on-Sea.

Twenty years on, Somerset has a vibrant and exciting local food culture, with Somerset Farmers’ Market Ltd supporting over 90 producers. As well as food production, the markets are also promoting sustainable shopping by encouraging traders to reduce their use of single-use plastic and applauding customers who come prepared with containers and re-usable bags.

So, bags at the ready, come along to this bumper market, support local food and help celebrate their birthday this Saturday.