Camille Claudel and the Singer’s Foundry: A Rodin Connection in Frome 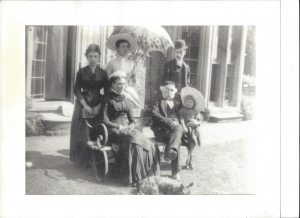 I have been intrigued by this photograph of John Webb Singer and his family since I first came across it working on the Singer’s archive of glass negatives in 2000. On the face of it, it is just an ordinary late Victorian family portrait of the founder of the Art Metal Works, outside North Hill Cottage, which can still be seen today at the top of North Parade. But it is rather more unusual than that, as pictured amongst the Singer family group is the French sculptor Camille Claudel, once famous for her relationship with Auguste Rodin, though her work has now been reassessed in its own right, with a museum dedicated to her life, which opened in Nogent sur Seine in March this year. The forty-three works in marble and bronze that are on display show why, eighty years after her death, she is deserving of the spotlight. 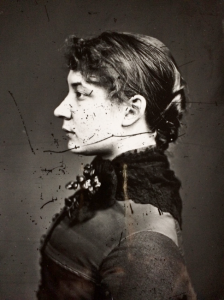 If it is remarkable to find Camille Claudel in Frome, it can be explained by the fact that the photographer of the family group was undoubtedly Amy Singer, John Webb Singer’s daughter, who was also a sculptor and the studio partner of Camille’s in Paris. Camille had come to England to visit the families of her fellow sculptors, which included not only Amy Singer but also Jessie Lipscomb and Emily Fawcett. All of these English friends had studied at the South Kensington Schools – that would become the Royal College of Art – before moving to Paris to be at the Academie Colarossi, where they had all met. Camille obviously felt very at home with Amy’s family in Frome and prolonged her stay for a week or so.

The foundry of J.W. Singer & Sons was held in the highest regard at both a national and international level. Up until this point it had mainly been producing ecclesiastical and domestic work, but John Webb Singer was about to expand his foundry in the part of Frome known to this day as Waterloo. In 1886 it started casting the large-scale bronze statues that we are so familiar with today. These include several prominent examples in London: the Boadicea group on the Embankment, Cromwell, who graces the lawn in front of the Houses of Parliament and the figure of Justice atop the Old Bailey. General Gordon on his camel at Chatham Barracks and was also cast in Frome, as were the magificent eight lions that form part of the Rhodes Memorial in Cape Town.

Camille had a tour of both the foundry premises at Waterloo and the Frome Art School (which was situated at the top of Park Road – sadly now demolished) that Singer had opened in 1865. 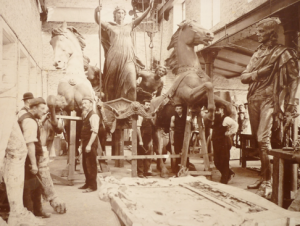 Singer & Sons were forward thinking enough to photograph all of the larger pieces before they left the premises. There are over 3,000 glass plate negatives in existence and it was whilst I was looking through the surviving negatives, that I came across a rare portrait amongst the images of artefacts.  At first I wondered who it is, but comparison with other photographs of Camille Claudel suggest that it is could be her.  She was extremely interested in photography, and there is a letter written on a rainy day spent with Amy in Frome, to Jessie Lipscomb asking if she could send the glass plate negatives that had been taken of their trip to make duplicates from.

Amy, Jessie, Emily and Camille were amongst very few women who were able to lead the independent life that they did, in both London and then Paris in the 1880’s. They were at the forefront of what was possible for women at that time. But then John Webb Singer was an enlightened father who made sure that Amy and her two elder brothers, Walter Herbert and Edgar Ratcliffe, all had the same education at the South Kensington Art Schools, then housed in what is now the Henry Cole wing of the Victoria and Albert Museum. This was the education that Singer would have loved for himself and is why he also opened the Frome Art School in 1865, which provided a highly skilled workforce for the metal works. 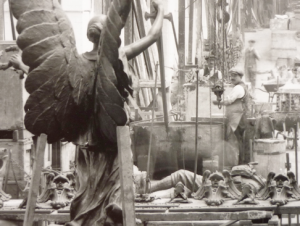 Singer was a totally self made man, his widowed mother had sent him to the Blue Coat Charity School (now the Blue House) and his first job was as an apprentice to a watchmaker. But he had an insatiable desire to learn. He first visited the continent at the age of twenty-two and subsequently made over fifty trips throughout his lifetime. The arts and culture of Europe were his passion – as is reflected in the work that the Singer’s foundry produced – and he must have been thrilled that Amy found herself right at the very centre of the arts, studying in Paris.  He loved the French capital, and on one of his many visits, had even found himself caught up in the siege of Paris in 1871, where he saw first hand the Prussian army and the destruction of buildings.  One of Amy’s tutors at South Kensington, Jules Dalou, was a Communard who had fled France, rather than face life imprisonment for his role in the uprising, although he was eventually pardoned and returned to Paris.

The post commune Paris that Amy Singer and her friends found themselves living in was a heady city, bursting with life and full of artists. In 1882, Rodin had become the patron of the studio that Amy, Camille, Jessie and Emily rented on the rue Notre-Dames des Champs. This street was awash with studios of both artists and sculptors – more than any other in Paris – so they really had found themselves at the centre of the art world.  Being together meant they could share the rent and the cost of models – the latter would not have been possible in Victorian England, where women students at the Royal Academy were excluded from life studies In short they could rejoice at a freedom they would not have been allowed in London. 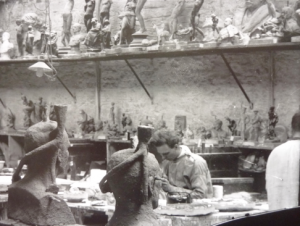 There is a letter in the archives of the Rodin Museum from John Webb Singer, thanking Rodin for his role as ‘patron’ of 117 rue Notres -Dames de Champs, and for offering lessons and advice. In 1885 Rodin chose both Camille Claudel and Jessie Lipscomb to be his studio assistants on the Burghers of Calais. This marked the start of Camille’s relationship with the married Rodin which was to last eight years, throughout which time her brilliant skills as a sculptor were employed on all his large commissions as well as making her own work. After the end of their relationship, though she was a wonderful sculptor, Camille struggled to survive as an artist in her own right. After what probably amounted to a breakdown of some sort, her family had Camille committed to a mental institution where she remained for over thirty years until her death in 1943.

Camille’s life and work is the most documented and preserved of the group of studio friends. Otherwise only the work of Jessie Lipscomb survives. She successfully exhibited in London at the Royal Academy and in Nottingham at the Midland Counties Art Museum in 1886 and 1887. But her departure from Paris in 1887 coincided with a fallout between herself and Camille who she did not see again for another 40 years until 1927. Jessie remained in touch with Rodin until his death in 1917.

It is not clear when Amy Singer departed from Paris and if she carried on with her work after her marriage at St John’s in 1889, or subsequently in Norfolk, where she lived until her death in 1943. One wonders what happened to all the work that must have been produced by Amy Singer during those years in Paris. I hope to be able to trace any of it that survives.

All images are courtesy of, and copyright Frome Museum.