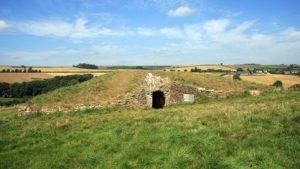 Stoney Littleton Long Barrow is one of the country’s finest accessible examples of a Neolithic chambered tomb. Dating from about 3500 BC, it is 30 metres long and has multiple burial chambers open to view.

Chambered along barrows like this one mark an important stage in evolution of prehistoric society in Britain. The barrow was intact until around 1760. Since then most of the contents, including skeletal remains have been lost.

The barrow at Stoney Littleton is very accessible where an entrance leads to a gallery and central passage. It has dry stone walls with a frontage of upright slabs and the roof consists of overlapping courses of stone. There are also three sets of [aired chambers and a seventh at the far end. Some of the chambers open directly from the side, with the main entrance being a dummy like the false doors in Egyptian tombs.