The Hungerford family occupied this fortifies mansion for 300 years, and as such their stories are inextricably linked to the castle. When visiting, you can learn more about their intriguing and sometimes gruesome past through graphic interpretation panels and a free audio tour.

Among the interesting hidden treasures to find are the rare medieval wall displays and family tombs located in the chapel, and the priest’s house, with its extensive displays. One of the biggest draws to Farleigh Hungerford is the crypts, which house the best collection of human-shaped lead coffins in Britain.

The fortunes of the Hungerford family have over their long and dramatic history been linked to the fortunes of the Crown and Parliament. Sir Thomas Hungerford was First Speaker of the House of Commons in 1377, and his son, knighted by Henry VI, received the Knighthood of the Garter after fighting at Agincourt. The fate of the family took a darker turn during the War of the Roses however, as they lost both their lives and their castle.

The castle itself was targeted several times during the Civil War, and in 1645 was surrendered. Though he was reputed to be a poor commander and often abandoned his troops, Sir Edward Hungerford III was later able to take back the castle. 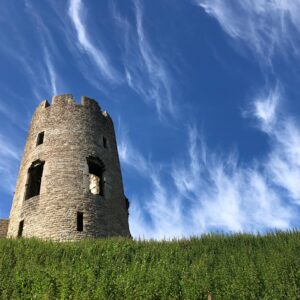 The inner court, the oldest and most important part of the castle, was built in the late 14th century by Sir Thomas Hungerford. Though it is now a ruin, it was built as a quadrangular fortified mansion, and was reinforced in the late 15th century. High round towers stood at each corner, with high conical roofs. Only the south-east towers and south-west “Lady Tower” (so-called from the likely mistaken story that Elizabeth Hungerford was imprisoned there in the 1530s) still stand. The towers were linked by battlement walls, with buildings ranging around an inner courtyard.

Walter, 1st Lord Hungerford, added the outer court between 1430 and 1445. Its principle entrance, the east gatehouse, was probably rebuilt sometime between 1516 and 1522 by Sir Edward Hungerford I, whose badge appears throughout this area. The outer court’s high curtain wall served as a strong defence, as did the deep ditch on the western side of the court, once filled with water.

The chapel of St Leonard, built between 1370 and 1383, was built as the parish church. The small north chapel was added in about 1400 to house Sir Thomas Hungerford’s tomb, and became the castle chapel in the 1440s. It was later altered in the 16th and 17th century. The chapel is notable for the many Hungerford family monuments and wall paintings which it houses. Those of Sir Thomas and his wife still retain traces of original paintwork. The east end of the main chapel also displays remains of the earlier wall-paintings, including a nearly life-sized depiction of St George. The north chapel, however, transformed between 1658 and 1665, also contains extraordinary paintings, which represent a paradise bedecked in Hungerford family heraldry.

Beneath the north chapel is a 17th-century burial crypt containing eight anthropoid (human-shaped) lead coffins, the finest collection of this type of coffin in Britain. Two are of infants, and four of the adult coffins have moulded faces, perhaps based on death masks.

The priests’ house east of the chapel was begun in 1430 by Walter, 1st Lord Hungerford, to accommodate the chantry priests employed to pray in the chapel for the souls of his family. After the Reformation, it became a dairy and then a farmhouse, remaining as such (although extended) until 1959. It now houses displays about the castle