Touring theatre returns to Frome with Shakespeare and Fairy Tales

It’s been a tough 18 months for the theatrical world, with many companies and venues only now just getting back to some sense of normality.

We caught up with the team at Folksy, a Scottish based theatre company, as they prepare to return to the Merlin for the fourth time with their two productions, The Tempest and Little Red and the Big Bad Wolf… 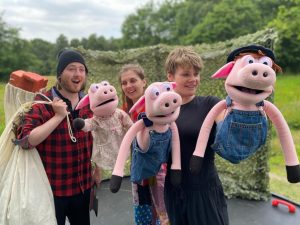 What are the Folksy team most look forward to about being back on tour?

We’re really looking forward to performing in front of live audiences again. We did lots of recording songs and scenes etc over lockdown and released them on social media but nothing quite beats a live audience!

What kind of response have you had from audiences – have you noticed a change since lockdown?

We’ve had a great response from audiences. Everyone has been really supportive and people are clearly as eager to get back to seeing theatre as we are to perform it. Tickets are selling well despite restrictions and there’s been such a warm and excited vibe at all the shows we’ve done so far.

This will be your fourth time in Frome – what draws you back?

Frome is such a beautiful part of the country. We have a good following there and the shows are always well received and fun, with an audience who really get on board.  The outdoor space is perfect for outdoor theatre and there’s always the option of moving indoors to the theatre if it’s really heavy rain or storms (although we always try to avoid going indoors!)

Do you ever get a chance to explore the centre of Frome?

We visited a cafe for tea and cakes last time we were there, which I think was called Cafe La Strada. It was a lovely little cafe with very tasty food! 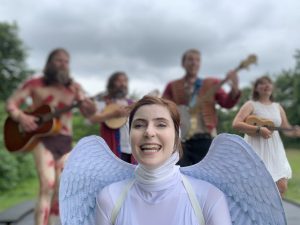 How have you managed rehearsals and preparations for the tour, given all the restrictions we’ve faced over recent months?

We “bubbled” with the cast and all moved in together throughout rehearsals, this made social distancing from each other a non issue and we could focus on making the productions the best they could be. Both our casts use really talented actor/musicians and they all play multiple roles and instruments, so it’s important they can help each other out, passing costume and instruments and not have to worry about distancing from one another.

Tell us a bit more about your production of The Tempest. Will we need a good understanding of Shakespeare to enjoy it?

We pride ourselves on our Shakespeare productions being accessible and we get messages from audience members every night saying how much they were able to follow the story, when in the past they’ve struggled with Shakespeare. Our productions are fun, with bold characters and are filled with live music and lots of silliness, which is how Shakespeare did it himself. I think this breaks people’s preconceived ideas that the language is something to be feared or something too difficult to understand. They have fun and relax and even if someone doesn’t understand every single word, they understand what’s happening and can easily follow the story.

The Wellerman sea shanty features in your production. It’s become so well known recently, have you had audience members joining in?

Yes, we deliberately chose Wellerman as an opening to the show, as it became so popular during lockdown, so it’s a nod to that and a celebration that we’re now all able to come together to sing it. We love people joining in – as long as they’re not better singers than us!

Tell us more about your family show, Little Red…

Little Red was written by myself (Lee Hardwicke), I also directed both Little Red and The Tempest. Gary Cameron was the composer for Little Red and also the musical director. I started writing the script some time ago, as it was supposed to tour in 2020 and of course was cancelled. It was a really fun show to work on, with lots of strong female characters and brilliant songs!

Folksy’s performance of The Tempest is on Wednesday 28th at 7pm with Little Red and the Big Bad Wolf following on the 31st at 3pm.