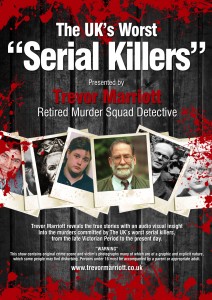 Following the success of “The World’s Worst Serial Killer Show” which toured the UK in 2014, retired murder squad detective Trevor Marriott and the shows presenter, has due to public demand, now compiled a new show in similar format, this time titled “The UK`s Worst Serial Killers”

The show is a two-hour audiovisual show in which he tells the stories behind some of The UK`s worst serial killers from the late Victorian period up to the present day. None of which were featured in the previous show. As with the previous show the content is taken from his highly acclaimed best-selling book titled “The Evil Within -The World’s Worst Serial Killers”

The new show describes the murders committed by many of the UK`s worst serial killers, some of which may not be so familiar to the many people that take a great interest in the crimes of serial killers. The show features over 200 photographs of not only the victims, but photographs from the original crime scenes, many of which will never have been seen before.

The show not only features the killers and their crimes, but shows the pain and suffering the victims must have endured before succumbing to death, as well as the pain and anguish caused to the families of the victims knowing what had happened to their loved ones at the hands of these monsters.

No one under 16 will be admitted without a parent or appropriate adult.