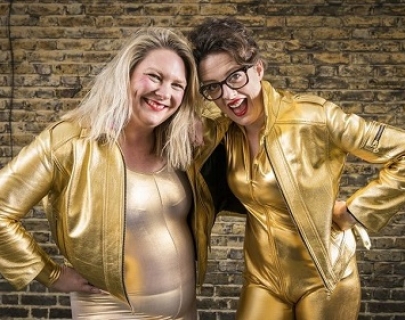 Join us for the first night of the Rode Comedy Festival in a beautiful open sided tipi (with safe audience social distancing in place) for a riotous night of comedy with Jarred Christmas hosting headliners The Scummy Mummies.

Ellie Gibson and Helen Thorn specialise in producing and performing comedy for less-than-perfect parents – so that’s all parents. Together they host one of the UK’s most popular parenting podcasts. Launched in July 2013, it was an instant hit, and has since been downloaded over 3 million times in more than 150 countries.

The podcast has been recommended by The Guardian, The Telegraph, The Sunday Times and featured on Radio 4’s Woman’s Hour. Guests have included Dara O Briain, Sandi Toksvig, Jenny Eclair, Mel Giedroyc, and parenting influencers such as Giovanna Fletcher, Mother Pukka, Unmumsy Mum and Hurrah for Gin.

In 2017, Scummy Mummies was nominated for the UK’s Best Comedy Podcast at the British Podcast Awards, along with Mixcloud and Lovies awards. ​The Scummy Mummies Podcast was featured in The Guardian’s “The 50 Best Podcasts of 2016”. They debuted at Edinburgh Fringe Festival this year and had a completely SOLD OUT run and received a 5***** review. They were also featured in three, Top 50 Jokes of the Fringe, including, GQ, inews and the Scottish News. They have an ever-growing social media following, with over 140,000 Instagram followers.