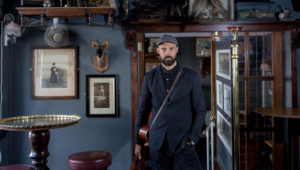 As a singer-songwriter Phil King has the whole trinity: a beautiful, soulful singing voice; deft skills at playing the guitar and the capacity to write elegantly worded and powerful songs. His latest studio album The Wreckage received excellent media attention with Radio 2’s Bob Harris describing him as “Absolutely Brilliant” and a “Song Weaver”.

Phil King has performed all over the UK, at festivals and fayres, in pubs, clubs and bars, on bandstands and boats, and once in a beautiful tree house. He performs regularly in Paris and has also played in Zurich, Barcelona, Berlin, Copenhagen, New York and Weston-Super-Mare. Phil has had his music played on many local radio stations and also by Bob Harris, Steve Lamacq and Alex Lester on BBC Radio.
“Stunningly Beautiful! The Wreckage should expand his profile considerably” Folk Radio UK

“Supremely talented singer Phil King, he has a voice to die for!” Time Out London

“Always Lyrical, Tuneful and Emotional, lovers of the darker side of folk and roots music will find plenty to enjoy!” Rock n Reel Magazine