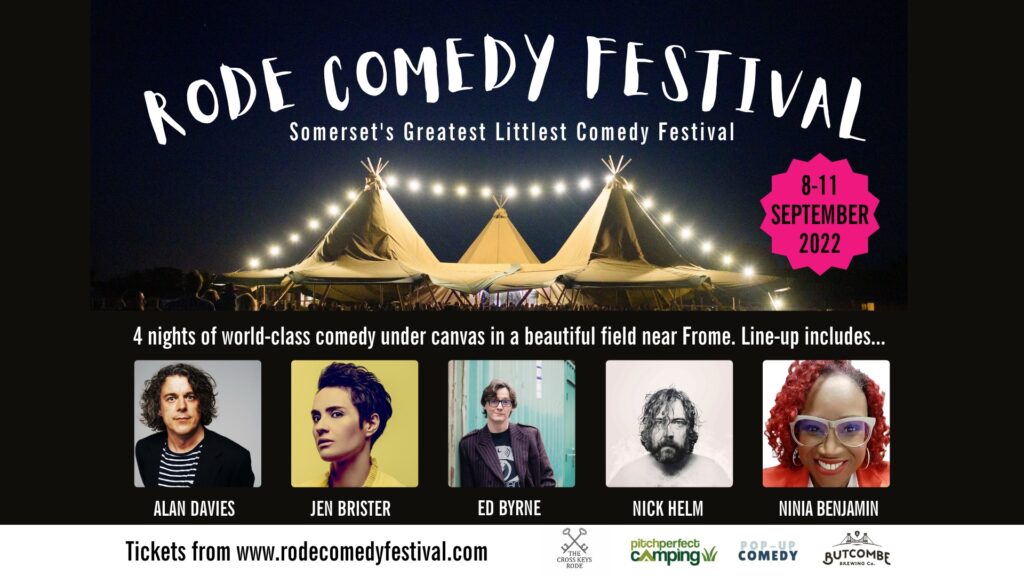 Somerset’s greatest littlest comedy festival is back for a third year. Set in a beautiful Somerset field at Pitch Perfect Camping there are four days of side splitting comedy to enjoy.

This show will be hosted by Jarred Christmas, and with British Sign Language interpreter Paul Mancini
JEN BRISTER – Fresh from a sold out UK tour, Jen Brister is an Award winning stand-up comedian, Author and star of Live at the Apollo. Jen Brister is electrifying and in huge demand.
FELICITY WARD – Nominated for best comedy show at the Edinburgh fringe in 2018, this Aussie jokester has been going from strength to strength. Popping up on tv and radio in the UK and Australia.
RHYS JAMES – Mock the Week regular and a list of tv appearances longer than a toddler’s arm. Rhys James is comedic gold and a must-see.

Hosted by Jarred Christmas
HELEN THORN – One half of the hugely popular scummy mummies and author of get divorced be happy, Helen is also a brilliant stand-up comedian and we are delighted to have her back a third time at Rode Comedy Festival.
NINIA BENJAMIN – An absolute legend of the UK comedy scene, Ninia has been headlining and splitting sides for over 20 years. This is pure stand up at its best.
ALAN DAVIES – QI. Jonathan Creek. As Yet Untitled. Years in the game. Comedy royalty. A master of the craft.

THE MIGHTY KIDS BEATBOX COMEDY SHOW
Comedy. Beatboxing. A show for all the family. Sell out tour in 2021. Straight from sell-out shows at the Southbank Centre, the Leicester Comedy Festival, Edinburgh Festival. Kids and their pet adults will love this bonkers and hilarious show, with Rode Comedy Festival favourites Jarred Christmas and beatboxer Hobbit.

LYNDSEY SANTORO – Extremely funny Santoro has been main Tour support for Joe Lycett and Russell Kane, finalist in British Comedian of the Year 2022, BBC New Act finalist and award-winning podcast host of Biggest Idiot. Lyndsey is on the way up… fast.
NICK HELM – The man, the myth the legend. 8 Out of Ten Cats, House of Games, Complaints Department, Comedians Giving Lectures, star and writer of the hit BBC show “Uncle”. stand-up power house. Master of heavy entertainment.
ED BYRNE – One of Ireland’s, if not the world’s, best stand-ups. He has been at the top of the pile for years and keeps on delivering. Ed Byrne is simply fantastic.
Hosted by Jarred Christmas and Hobbit

STEFANO PAOLINI – Semi-Finalist on Britain’s Got Talent 2022. Impressions, sound effects and jokes blend together in the one-person comedy machine. Paolini has been wowing comedy goers for years and is always a comedic treat.
ANGELOS EPITHEMIOU – Cult sensation from the TV show Shooting Stars. Angelos has been selling out tour shows and popping up on tv shows and more importantly… making people laugh their faces off. Hilarious character comedy at its best.
PAUL SINHA – You might know him as the Sinnerman from The Chase. Or from Taskmaster. He is also a multi award winning stand up. Incisive and brilliant. Paul Sinah is one of the best live stand-ups around.
Hosted by Jarred Christmas and Hobbit
JARRED CHRISTMAS – Award winning host and called one of the funniest people to pick up a microphone by Time Out Magazine. He also co-runs the festival, it would be rude if we didn’t book him.
HOBBIT – World champion beatboxer and UK champion loop station. Hobbit co-hosts with Jarred Christmas and is a master of the art of sound.