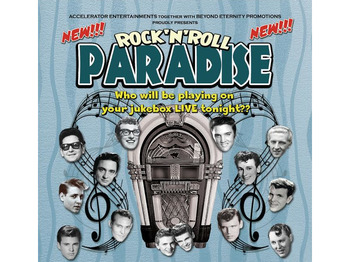 In 2017 Rock ‘n’ Roll Paradise returns to the UK’s theatres for the 8th successive year but in a new and exciting format. For the first time ever the show’s producers are not disclosing ‘who’ will be performing at each show, but they are promising that no two performances will be the same, and each show will be crammed full with the country’s best tributes to rock ‘n’ roll’s stars, performing the very best songs ever written and supported by the explosively dynamic Paradise Band. Amongst those ‘appearing’ will be Gene Vincent, Buddy Holly, Jerry Lee Lewis, Bill Haley, Roy Orbison, Johnny Cash, The Everly Brothers, Neil Sedaka, The Big Bopper, Carl Perkins, Del Shannon, Eddie Cochran, Ritchie Valens and even the king himself – Elvis …… the question is, who will you be lucky enough to see?