One of Bristol’s favourite live bands Flash Harry will be playing a special gig at The Cornerhouse directly after the popular Food Festival on Saturday July 2nd. The five-piece band featuring Frome’s own Vicki Burke on Saxophone and backing vocals have been delighting audiences for almost 30 years, earlier this year the Cornerhouse found itself packed out for their first appearance in the town. Playing an infectious and foot stomping blend of fast folk, blues and gypsy jazz Flash Harry have a long and distinguished history with members having worked with iconic musicians such as Vivian Stanshall, Liam O’Flynn and many more.

Vicki Burke who lives in Frome and has also played with the Up Bustle & Out, Doreen Doreen and Fat Stanley said ’getting my band down to play in my home town is always fabulous, it’s a rare occasion but it’s well worth the effort, we love playing here. We hope that people have a great time at the food feast and then wander up to catch us for a big late party up at The Cornerhouse.

Flash Harry go on stage at 9pm and play until 11pm, entry is free. Event number 217 in the Frome Festival programme. 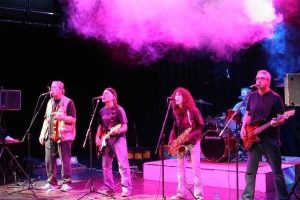