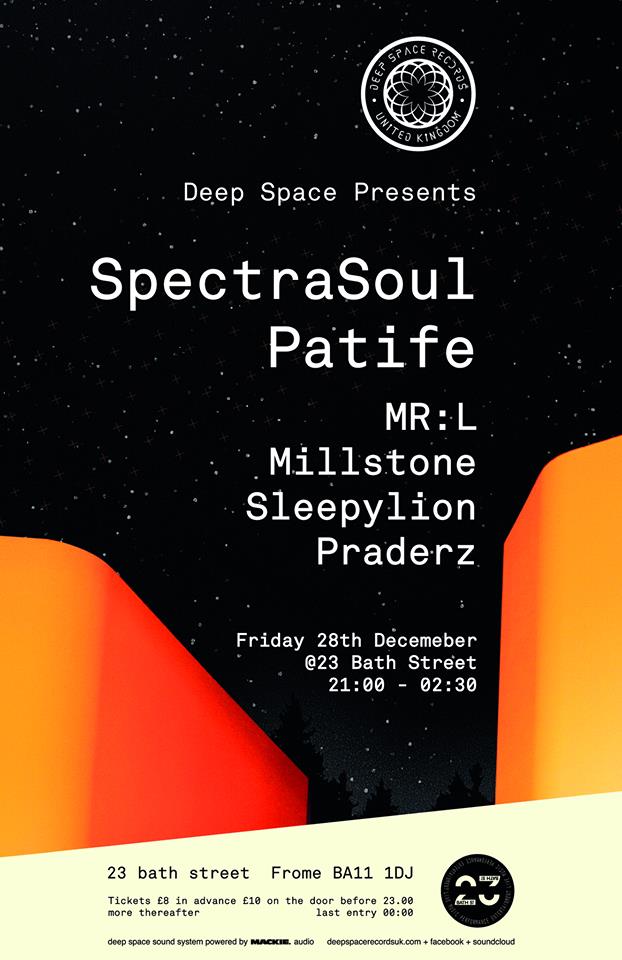 We are back once again @ 23 Bath St, Frome for our Christmas party. To finish off the year in style we are bringing two genuine Drum & Bass superstars to Frome…

Since their emergence in 2006, SpectraSoul has carved a truly unique position, not only in Drum & Bass but electronic music as a whole. Having released music on only the very finest and most respected labels in the scene, from Goldie’s legendary Metalheadz to dBridge’s boundary-breaking Exit Records, and Kasra’s ever progressive Critical Music, they went on to become vital members of Friction’s irrepressible Shogun Audio imprint. Beautifully deep and etched with groove yet powerful enough to move any dancefloor, SpectraSoul’s stunning musical productions are a far cry from the soulless, synthetic rave fodder so many unfortunately associate with Drum & Bass today. Gracing clubs and festivals the world over, the global recognition of SpectraSoul’s seductive production skills and achingly smooth mixing abilities has earned them their stripes as a truly treasured gem on the Drum & Bass and Electronica circuit.

And all the way from Brazil DJ PATIFE…

DJ Patife had contact with the Drum & Bass scene through friend DJ Marky while working in a record store. DJ Patife’s first gig was at São Paulo’s Arena Music Hall.

In 1997, he travelled to Europe with Marky. There, he accompanied Roni Size in the delivery of the Mercury Prize. With crescent popularity, Patife released his first album in 2000, Sounds of Drum’n’bass. The album was praised by England magazines Muzik and Mixmag, resulting in an invitation to release the album in that country.

In 2000, Patife, Marky, and the Drumagick duo played for 5,000 people in São Paulo. Patife’s remix for Max de Castro’s “Pra Você Lembrar” was a hit in the Londoner dance tracks and was included in the main England dance magazines’ playlists. Three of Patife’s songs were included in the compilation Brazil EP, released in England by V Recordings. In 2000, he participated in Otto’s double-CD Changez Tout – Samba Pra Burro Dissecado and in Fernanda Porto’s album. Patife played in the 2001 version of the Rock in Rio festival. Also in 2001, he performed in the U.S., Scotland, London, and Amsterdam.

In support of the two heavyweight headliners will be 4/5ths of the Deep Space crew MR :L, MILLSTONE, SLEEPYLION and (not to be outdone by Patife) PRADERZ! all the way from the U.S.

Tickets now on sale @ Skiddle.com advanced tickets £8
More on the door so get your tickets quick because this will sell out