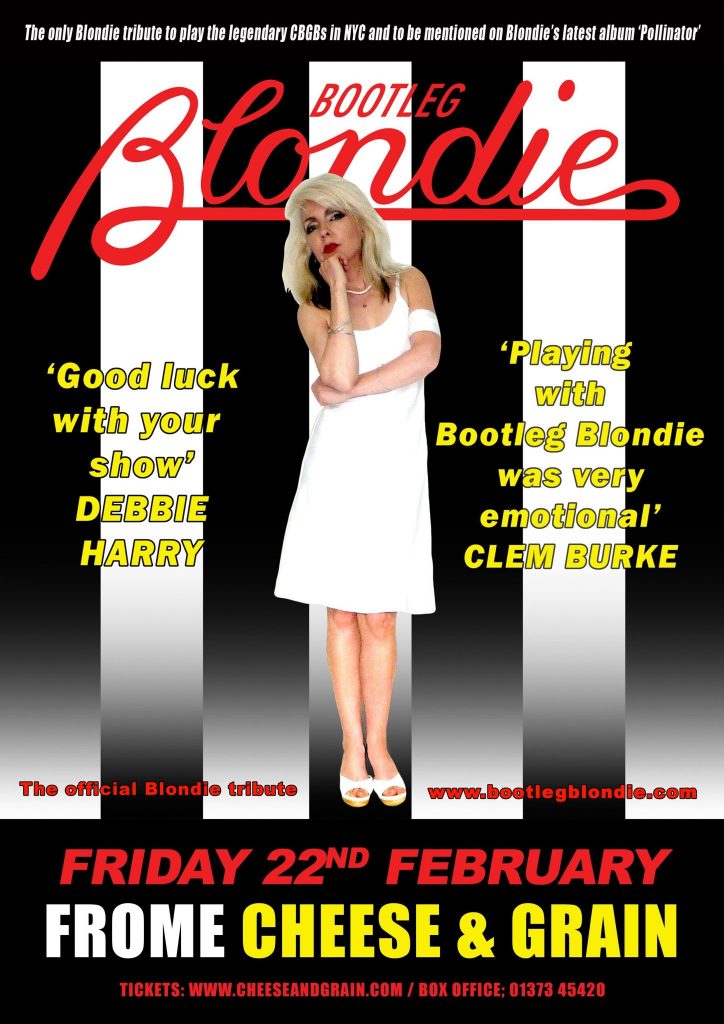 BOOTLEG BLONDIE is the official Debbie Harry & Blondie tribute band, the only Blondie tribute to play the legendary CBGBs in New York City and to have the honour to be mentioned on Blondie’s 11th studio album ‘Pollinator’.

Lead vocalist Debbie Harris has appeared on two shows for BBC1 when she was picked out of 15,000 applicants to represent Debbie Harry on ‘Even Better Than The Real Thing’ hosted by Paddy McGuinness. The shows attracted an audience of 10 million viewers!

Debbie Harris and Bootleg Blondie have played the Isle Of Wight Festival, the 100 Club, the Hammersmith Palais and the Electric Ballroom in London, Eric’s in Liverpool and have opened up for amongst others The Undertones, Slade, Bad Manners, The Beat, Heaven 17, Toyah, Hazel O’Connor, Visage, Bananarama, Altered Images, Howard Jones, Chas and Dave, Tony Hadley and can be seen at all the major venues and festivals around the UK and Europe.

Debbie Harris and the boys have met the REAL Blondie and are officially endorsed by the band. Debbie Harry got in touch in 2006 when she heard we were playing CBGBs in New York City to wish us good luck with our show and when Clem Burke, Blondie’s charismatic drummer, found out that we were making a replica of his Premier drum kit, he arranged for us to meet him to sign our drum kit which we use at all of our shows. ‘During the 2010 Blondie tour of the UK we took Clem out for a trip around London in our tour bus, he signed that too!!!!’

In 2014 Clem invited Debbie and Andy to a recording session at the Foo Fighters’ famous 606 Studio in Los Angeles, where they saw Clem and the awesome Neve mixing desk in action!

Debbie and Andy got married in March 2016 and to their great delight received two video messages from both Blondie and Debbie Harry herself congratulating them on their wedding day. What a wedding present!

And probably the best Xmas present in the world ever was in 2016 when Clem Burkecame along to a Bootleg Blondie gig and actually got up and played drums on stage with the band! He said afterwards that watching and playing with Bootleg Blondie was very emotional. Well Bootleg Blondie were very touched by Clem’s presence!!!Check out the short video clip on our Video page.In May 2017 Bootleg Blondie had the unbelievable honour of being mentioned on Blondie’s acclaimed 11th studio album ‘Pollinator’. Probably a first for any tribute band!

Debbie Harris, lead vocalist of Bootleg Blondie, has the looks, the voice and the attitude of the original Blondie bombshell and like her heroine is typically outrageous on stage. She has been known to wear dustbin liners, thigh length boots and t-shirts with more holes than t-shirt! Debbie’s pride & joy is her guitar that she plays at every show and is signed by all the Blondie members.