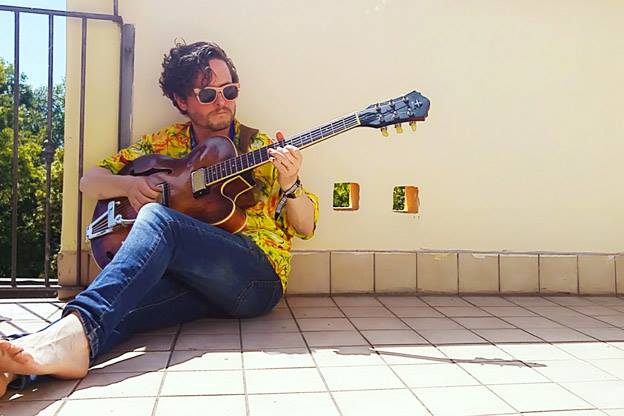 Billy Shinbone is the deviant folk-pop-skiffle manglings & disco-punk-rock-blues of Somerset. Multi-instrumentalist Billy Shinbone, -funnelling his twin passions of old country & 60s psychedelia through the rusty plumbing of a DIY musical approach & his love of a twisty lyric. It all began when he spent time touring in the USA with arty psychedelic popsters Flipron & found himself falling in love with the old country & Cajun music he was hearing in the bars of Tennessee & Texas. “I wanted to be in a world where a fancy suit wearing, electric sitar playing, poetry reading, cocktail drinking aesthete like me could happily exist pouring himself into the Cajun rhythms & stomping hillbilly hollers that would be naturally suspicious of anyone not dressed in denim & plaid. That world didn’t really exist so I had to invent it for myself. A world where Jeckyll & Hyde can hang out together & have fun. And anyone is welcome to come & spend some time here. Music is the potion.”
Billy has toured Germany four times, played at Glastonbury Festival in 2014 & 2015 & released a debut single “If You Think You’ll Get Away With It You’re Wrong” in 2016.

Jamie R Hawkins is an Award Winning Singer Songwriter whose songs have won him critical acclaim in the UK and around the world…He has been described as “a powerful mixture of storyteller, philosopher and poet”, his lyrics as “poignant and witty” and his performances, “emotive and captivating”.
His song ‘Bloody Good Xmas‘ won the acoustic/folk category in the 2011 UK Songwriting Contest and went on to achieve a #2 position in the Amazon download charts. He has since gone from strength to strength, forging for himself a dedicated and growing fan-base, particularly in the Southwest of England and Central Europe.
“emotionally charged, poignant and witty acoustic pop-rock that reminds you of Crowded House or even Del Amitri, which is fine by me” – Secret Chord Records