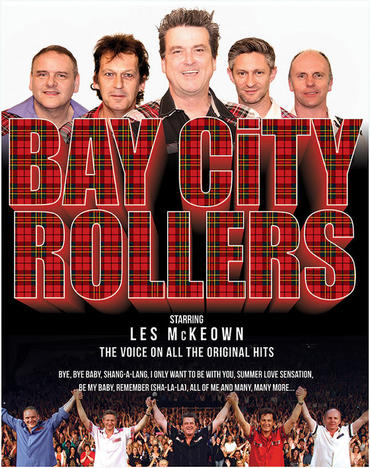 With a phenomenal 300 million worldwide record sales, the Bay City Rollers along with The Beatles, are the only group to have the word “mania” appended to their name, which conveys the amazing pandemonium that surrounded them!

The hysteria that they created in the mid-70’s had to be seen to be believed! Championed by such magazines as Blue Jeans and Jackie, the band took to the stage in their calf-length tartan trousers, tartan shirts, platform boots and socks bearing images of their faces on the side. The tartan scarves waved by adoring fans are still very much part of the gig experience today as are the high energy performances that have wowed audiences worldwide for over three decades.

Described by the book of British Hit Singles & Albums as “the tartan teen sensations of Edinburgh” they were the most screamed at band of the era and became universal teen idols for a fervent period dubbed as Rollermania”.