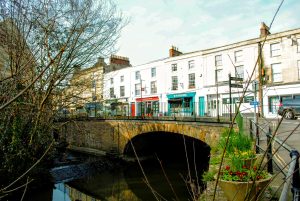 The Frome Bridge, besides the best example of Pulteney Bridge in Bath, is one of only two in Britain, the other being in Lincoln, having multi-storied shops built actually on the bridge. Most people are familiar with the Old London Bridge which was similarly built, but it is unusual to see such a structure on Frome’s small scale. In the picture to the right you will be crossing it from right to left. This bridge was built in 1821 but it was the fourth Frome Bridge in that position, the original having been built in 1667.

A good view of the bridge itself is from Willow Vale which runs along the river bank and has some attractive Queen Anne houses and elegant porches, if you have time to wander