Cheddar Gorge is one of England’s most iconic and spectacular landscapes. At almost 400 feet deep and three miles long, this is England’s largest gorge. With its weathered crags and pinnacles, it is a spectacular natural sight. The gorge would have begun forming about one million years ago during the last Ice Age. The Cheddar Yeo River gradually made its way underground, creating the famous Cheddar Caves.

Explore the Cheddar Gorge and Caves 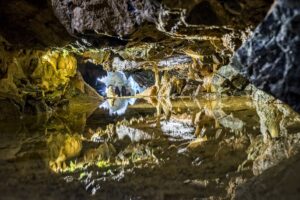