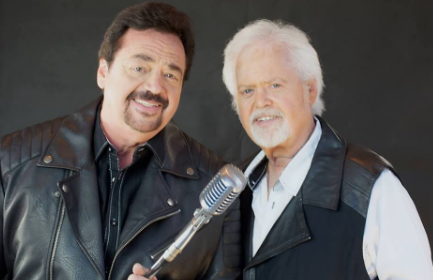 The Osmonds have recently just finished a British Arena Tour where they headlined along with David Essex, Suzi Quatro and Hot Chocolate.

Performing songs from a career spanning over 6 decades

The Osmond Brothers – Alan, Wayne, Merrill, and Jay, recorded their first record album in 1963. Since that time with the addition of Donny, Marie, and later Jimmy, collectively and individually, the family has had approximately 200 albums released.

The Osmonds still have very successful recording careers, having sold over 100 million albums worldwide and have 59 gold and platinum records to their credit.

The Osmonds knew that variety was their key to a successful recording career and they have covered just about every music genre imaginable, including Barbershop, Pop, Rock, Disco, Country, Gospel, Broadway, Swing and Jazz. In addition, they have recorded in eight different languages – Swedish, Japanese, Samoan, German, Spanish, French, Latin, and of course, English.

Their first bit hit was “One Bad Apple” recorded on MGM records, going straight to #1, staying at that peak position for six weeks. In 1972, their hit “Crazy Horses” reached number 14 on the US Billboard Hot 100 and number 2 in the UK Singles Chart.

The Osmonds have proven to be very talented and successful song writers, and have penned a majority of their biggest hits – including Down by The Lazy River, Crazy Horses (their biggest international hit), Let Me In, Goin’ Home, and many more.

With each album recorded, the Osmonds’ talents and abilities continued to grow musically and they still know how to touch the hearts and souls of their fans. No other musical group or family can match their harmonies. Brothers Alan and Wayne are now retired, but Merrill and Jay continue to perform together. They are entering their sixth decade performing as the Osmonds and the best is only yet to come.

The band perform all the hits including:
One Bad Apple, He Ain’t Heavy He’s My Brother, down by the Lazy River, Crazy Horses, Goin’ Home, Let Me In, Love Me for A Reason, The Proud One, Plus many more.

The Osmonds are still as active now as they ever were and still fronted by Merrill and Jay.