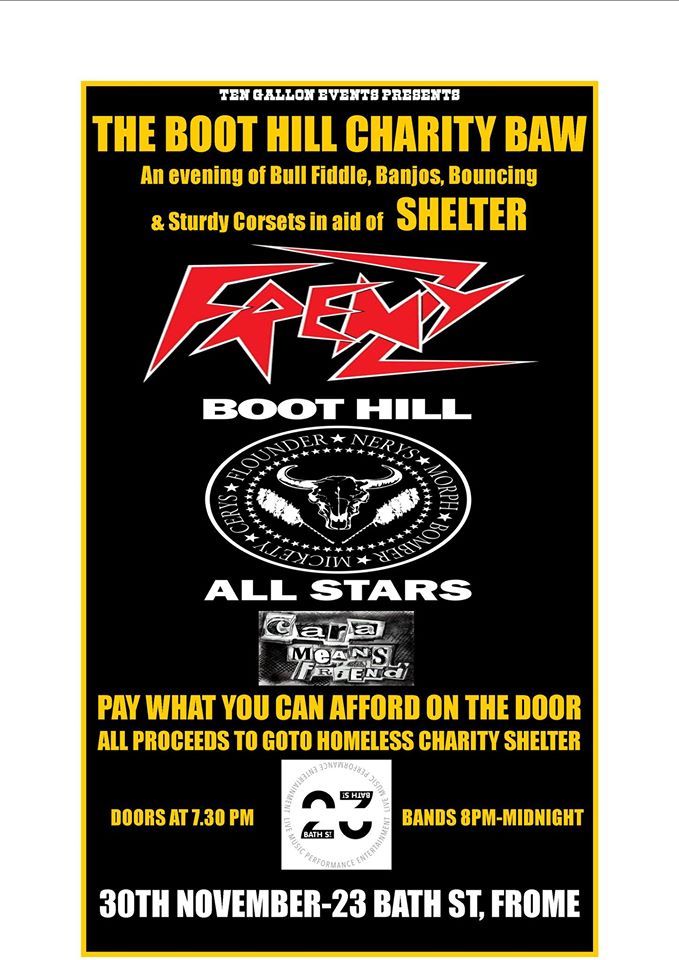 It’s the Annual Boot Hill Charity Baw in aid of Shelter – and it’s gonna be a top night!! featuring none other than Psychobilly legends FrenZy, The Boot Hill All Stars and Cara Means Friend all hosted by those kind people at 23 Bath St. Everyone is playing for free and it’s a way of us having a top night and helping those less fortunate than ourselves. Pay what you can afford on the door and let’s see if we can break last years take of £500. If you can’t make it and still want to donate, then please pm The Boot Hill All Stars and we will set up a PayPal account. Press release below…

In a rare Somerset Gig, Frome-based festival favourites Boot Hill All-Stars are playing their home-town in aid of homelessness charity Shelter this Christmas. This year they team up with International Rockabilly Legends FrenZy and Songsmith Cara Means Friend

Having been mainly concentrating their availability over the UK Festival Circuit over the last 5 years Glastonbury Festival (official), Boomtown Fair, Once Upon a Time in The West Festival, Sunrise, Watchet Music Festival Camp Bestival and loads more!!), this is one of the final gigs on their 10th Anniversary Year.

Frenzy
FrenZy was formed by Steve Whitehouse in August 1983 after his success in a previous band, The Sharks. The music was then based around the 80’s Neo-Rockabilly revival bands that were featured heavily in the National Charts …. but with more of a punky and quirky twist. The band signed a record deal within the first month of forming and played their first-ever show in Holland!
Since then, FrenZy has constantly been writing and recording music ….and released 13 albums. Their biggest recording success came with the Clockwork Toy album ….that was produced by the band in conjunction with Pete Gage (musical director and guitarist for Geno Washington’s Ram Jam Band). From the album came the band’s hit single, I See Red … that, like the album, featured in the top 10 of the National Indie Charts in 1986! There have been many other recording highlights over the years…and FrenZy have constantly toured all over the World…but their last album, In The Blood, gave the band a new vigour …and it received critical acclaim in every review. This opened new doors for FrenZy…as the current line up of Steve Whitehouse, Steve Eaton and Adam Seviour …and the band are currently busier than ever, just returning from a successful German/ Dutch tour and Festivals in France & Finland. Their live shows are driven by pure energy…as the band’s name suggests! The 14th album is now being worked on ….due for release in 2020.

The Boot Hill All Stars
If you like your banjo music, fast, filthy and with more than a little cleavage, then look no further Brethren. The BHAS show promises songs of tequila fuelled evenings, dubious morals and twisted family values.
Previous shows included include varied supports from The Damned, Hayseed Dixie, Neville Staple, The Beat to local legends The Wurzels. Regulars on the festival circuit ( Boomtown, Once Upon a Time in the West, Bearded Theory, Glastonbury, Watchet, Camp Bestival, Endorse it etc) since 2008. It’s a great, fun show – full of audience participation and certainly not to be taken without a degree of fitness and a sturdy corset. The evening promises to be a heady mixture of furious banjo powered hoedown-ska, tinged with corsets, feather dusters and general jollity. It’s a workout for the Soul!!

Cara Means Friend
Cara-Jane Murphy brings her own unique talent, skilfully blending reggae, folk, hip-hop and ska into an acoustic show that is a pleasure to behold. Cara has also been a vocalist with ska band The Defekters and with Phoenix City, All-Stars – get down early as she is one act not to miss.

The party starts at 7.30pm on Saturday 30th November at 23 Bath Street, Frome.

Boot Hill All-Stars singer Flounder Murray said: “We have a great time during the year playing all over the Country, seeing lots of new places and old faces. It’s a huge privilege to be able to do this. So it’s time to use our resources to give something back to those less fortunate. All bands are playing for free and all takings go direct to Shelter UK… It’s donations only, you can just spend what you can afford. Come along and support a great cause.”