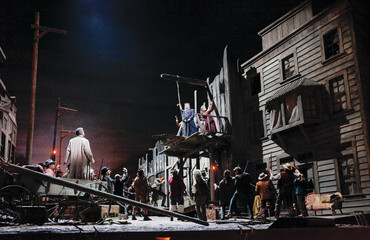 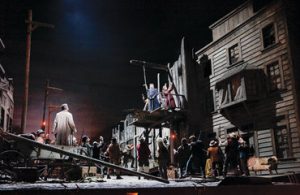 The Metropolitan Opera presents
LA FANCIULLA DEL WEST
Streamed live from the New York Met
Puccini’s gunpowder western returns to the stage where it premiered under Arturo Toscanini.
Gold Rush, 1849. Bar owner Minnie looks after a crew of rough miners while fending off the unwanted attentions of the local sheriff. When a tall, mysterious stranger walks into the bar, it looks as if her life is about to change. But the newcomer is not what he seems, and Minnie gets drawn into deadly peril.
Boasting gunfights, poker games, and stagecoach robbers, La Fanciulla del West combines the action of a great adventure with the emotional punch of Italian opera.
Soprano Eva-Maria Westbroek sings the role of the gunslinging heroine, alongside Jonas Kaufmann as the outlaw who steals her heart. Marco Armiliato conducts.
Italian with English subtitles
Running time: 3hrs 22mins including two intervals