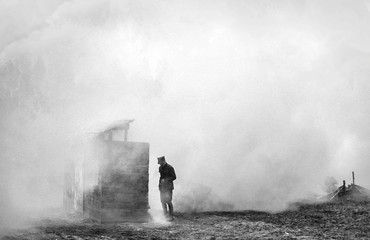 Frome will be observing the Annual Act of Remembrance, which falls this year exactly one hundred years to the moment Armistice was declared, at the eleventh hour on 11th November 1918.

The Town Council, armed forces groups and Veterans; representatives of organisations that serve our community, along with schools, youth groups and others will be welcomed, as wreaths are laid to the memory of the fallen, and those who Lived On, but who carry the scars, in mind or body.

Besides the Remembrance Sunday parade and service many schools, arts organisations, churches, sports clubs and groups, in and around Frome will be making their own observance.  Please take time to visit and support any of the events.

We walk in the space that was left behind. Hold that thought, when you see silhouettes around Frome:

the “therebutnotthere” project, supported by the Armed Forces Covenant and armed forces charities is “returning the fallen to the spaces they left behind”.

From 1918 – Readjusting to Peace.  Commemorating the end of World War 1.

An exhibition looking into the effects of the First World War on the local population before and after the armistice.

Crosses to the 224 men of Frome who fell will be on display.  Public welcome to lay crosses.

Daily at 11am, a roll call of ten names, with a brief WW1 history of the day.

Pebbles painted in poppies made by Frome Scouts, will adorn the area in the distinctive Fleur de Lys formation.

An evening of music, songs, poetry and a resume of the war. Light refreshments and a bar.  Free entry with donations to the Royal British Legion

A special Service of Remembrance attended by Mr David Heath MP and the Mayor of Frome.

Commemorating the fallen and dedicating the addition of names to the memorial.

These dates have been compiled by Jane Norris Chairman of the Frome Branch RBL.

It is not a conclusive list, and all other events are welcomed to be added.