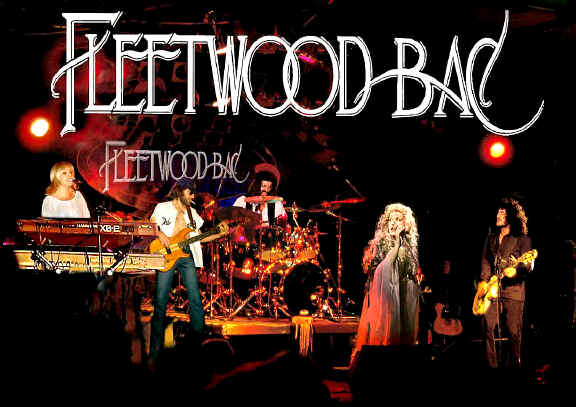 FLEETWOOD BAC were the world’s first and are regarded as the UKs most authentic Fleetwood Mac Tribute show, endorsed by Mick Fleetwood himself, raved about by Peter Green’s biographer, and were the first Fleetwood Mac tribute band to fully replicate the classic Stevie/Lindsey/Christine/John/Mick ‘Rumours’ line-up.

Fleetwood Bac have been rated by The Times newspaper as one of the U.K.’s top 5 touring tribute shows, alongside The Bootleg Beatles, Bjorn Again and the Counterfeit Stones with rave reviews in ‘The Stage’,fantastic endorsements from several of the leading Fleetwood Mac fansites and from the official Stevie Nicks website,They have had ecstatic audiences wherever the band have played and wowed audiences as far afield as St. Tropez and the Cayman Islands to Monte Carlo and Dubai.

A Fleetwood Bac tribute show isn’t just about performing the music of one of the worlds best loved bands, Fleetwood Bac fully replicate a Fleetwood Mac rock show as it was back in the 70’s & 80’s.Having now performed over 900 tribute shows, Fleetwood Bac have spent over two decades perfecting that classic Rumours era sound, the look, the mystical atmosphere and that infamous on-stage chemistry, all are portrayed with the passion,energy and respect that got them the ultimate seal of approval from ‘Big Daddy’ Mick Fleetwood.

Fans also include original Mac bassist and biographer the late great Bob Brunning who joined the band several times on stage, and Peter Green’s official biographer Martin Celmins. The band were honoured when original Mac legendary guitarist Peter Green came to see them perform and were delighted to spend time with one of their heroes after the show.

The show also features several songs from the Peter Green days, plus some of Stevie Nicks biggest solo hits, in either a theatrical 2-hour show, including costume-changes and an acoustic section, or a one-hour Greatest Hits Show, specially tailored for festivals or corporate events. For a more intimate vibe Fleetwood Bac can also perform a full ‘Rumours & Beyond’ acoustic set.

If you love Fleetwood Mac this is the tribute show you cannot afford to miss!!