An Evening with Tim Pitman: A Tribute to Bocelli & the Italian Tenor 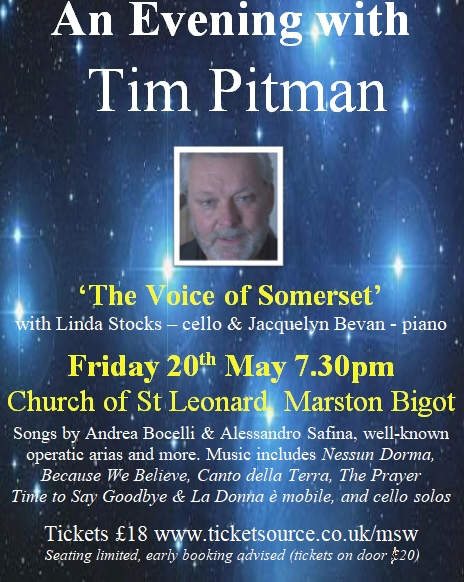 Bocelli fans – here’s something not to missed!

On Friday 20th May at the beautiful little church in Marston Bigot, Tim Pitman performs A Tribute to Andrea Bocelli & the Italian Tenor. An evening of fabulous songs including The Prayer, Canto della Terra, Because We Believe, Sogno and other well-loved melodies, with operatic arias including Nessun Dorma.

Tim Pitman is a Somerset-based tenor with the most extraordinary and versatile voice. His musical career spans over three decades. He was the first singer/songwriter to be awarded a grant from The Prince’s Trust, and he performed before HRH The Prince Of Wales.  In 2002 Tim began training as an operatic bel canto tenor, studying with Andrew Hambly-Smith, and among numerous other concerts, in 2005 sang Nessun Dorma at Glastonbury Festival with the Royal Philharmonic Orchestra. Tim organises and performs numerous concerts and is currently working on a new project with the Symphonic Rock Orchestra.

Tim will be joined by Duo Paradis (cellist Linda Stocks and pianist Jacquelyn Bevan), who will play cello and piano pieces inspired by the human voice, including Rachmaninov’s hauntingly beautiful Vocalise.

Tickets are £18 in advance from www.ticketsource.co.uk/msw or £20 on the door.

Booking is advised as seating is limited.